This just in from my friend Whitney who lives in Florida.

I was in Tel Aviv visiting with my high school friend, Avia, who has been living in Israel since college. We met up with some of her friends and spent the afternoon on the beach. After a day in the scorching July sun, we were all in need of some refreshment and a TV to watch the Germany/Argentina soccer game. 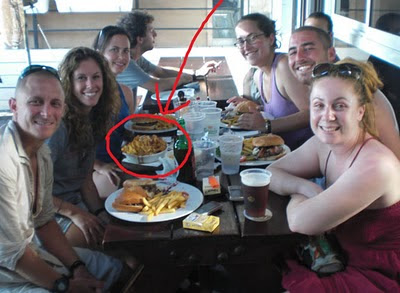 We made our way up to Mike's Place, a recommended beachfront watering hole that would surely give us North Americans a sense of home. As we were walking in, I noticed a patron chowing down on a dish that looked suspiciously like poutine. 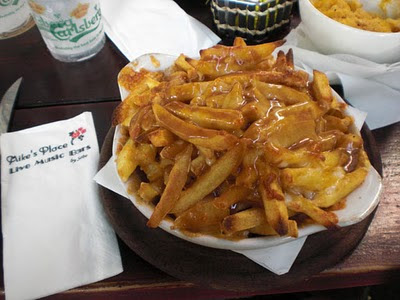 But, poutine in Israel? Nah, couldn't be. 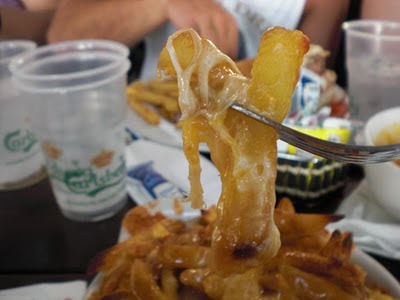 Upon further investigation, the menu revealed that Mike's Place did in fact serve their own version poutine. Crazy! The menu reads: Our homemade fries baked with cheese in a stone brick oven, topped with gravy. 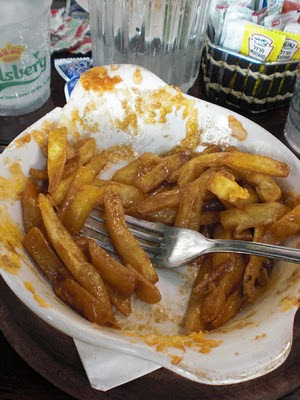 I was too excited by this unlikely melding of cultures not to order it, not to mention my sense of duty to your study of poutine. I learned that the owner of Mike's Place hails from Canada, not surprisingly. So, how do you like that? It's going international.

I love it! Thanks for the overseas report Whitney. Looks like yummy poutine!

Good job, Whitney! But what's your curd rating (although I guess in the Middle East it is a Kurd rating!!)

Poutine is a mind-boggling combination of french fries, cheese curds and gravy. A Canadian invention, poutine was created in Québec and its popularity has spread across the land. On occasion, if you're lucky, you can find poutine in the U.S.A. Since I live on the Ontario/Québec border, poutine is as ubiquitous at chip stands and restaurants as burgers and hot dogs.

This blog follows the search for the perfect poutine. For waistline and cholesterol reasons, consumption is limited as much as I possibly can. So I'll need your help!

If anyone has had a poutine experience, good or bad, please e-mail me with the name and address of where you tried it and a description (and photo of the poutine if possible). Also, a rating of how good the poutine was out of a possible five curds (for a fantastic one).

ronnamogelon @ gmail.com (remove the spaces when you e-mail me). Thanks!